To learn more about the fair, location, and times please see their website.
Canada 150 Celebrations – UNVEILING #24
Aug, 2017
Arrowsmith Hall, Coombs Fair Grounds, Coombs, BC
We were pleased to be invited by the Arrowsmith Agricultural Association to show the series as part of their Canada 150 Celebrations at the Coombs Fair in August 2017. To commemorate the event, Joan created #24 in the series which was unveiled at the fair during a special invitational event.
This artwork pays homage to the past and present history of the RCMP. The setting depicts Depot in Regina and the 2 mounted officers represent historical and contemporary uniforms and gear. Unveiling the artwork is Chief Michael Recalma from the Qualicum First Nations and SS Marc Pelletier from the Oceanside RCMP. 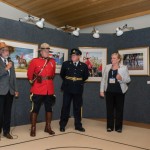 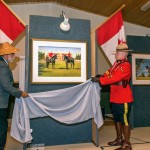 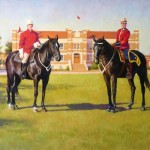 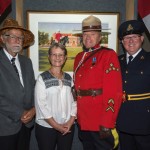 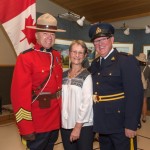 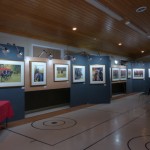 Acclaimed equine artist Joan Larson will unveil her latest piece in her ground breaking series of artworks celebrating the RCMP Musical Ride.
This will be the first time that the “Musical Ride Artworks” have been seen in conjunction with the “RCMP Musical Ride.”
To commemorate this event, Joan has created a special piece, #23 in the series and along with RCMP Supt. Marty Chesser they will unveil the newest artwork. 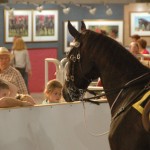 Officers and horses during the “Meet & Greet” with the artworks in the background. 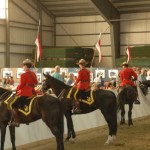 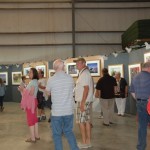 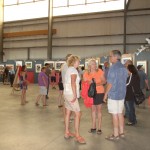 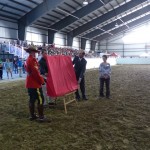 The artwork was carried into the ring and placed in front of Insp. Marty Chesser. Pictured is Sgt. Karen Miller, Paul Smith of Creekside Studio, the Honourable Chris Burger, Mayor of Parksville and Joan 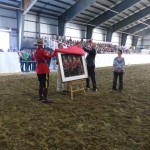 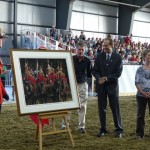 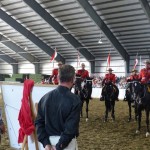 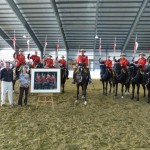 #23 shows Supt. Marty Chesser at the head of his column of officers. The reference for this artwork came from photos that Joan took when the RCMP Musical Ride performed at this exact location in 2009. Supt. Chesser was previously unaware that he was the subject matter for this artwork. 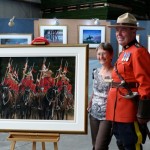 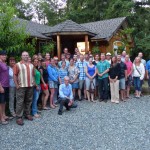 After the festivities of the weekend, Joan and Paul invited the Musical Ride officers and friends to a casual BBQ at their acreage. Pictured here in front of the studio, it was a special evening, one that will live in Joan’s memory forever.

In Celebration of Canada – View Musical Ride Series and attend free presentation “The Making of a Series” (details will be posted as they become available, or email Joan at joan@joanlarson.com)Also on display will be a selection of original artworks from The Wild Horses of Sable Island (Read about Joan’s trip here)
March 11th – 13th, 2011
Bradley Centre, Coombs, BC.
Opening Reception Friday, Mar. 11th, 7 – 9 p.m.

In Celebration of Canada – See Joan Larson’s stunning Musical Ride Series in person.
December 16th, 2010
Joan Larson’s Creekside Studio releases RCMP Musical Rides Series Commemorative prints.
Visit www.joanlarson.com to preview of these and other unique Joan Larson images including an up-coming Sable Island Series.
Chek 6 Island 30  November 18th, 2010 at 7:00 pm
Joan Larson’s RCMP Musical Ride series will be featured on Chek 6 TV in a segment of Island 30 in a personal interview with Stacy Ross.  Joan and Paul Smith (Marketing Manager, Creekside Studio) discuss their inspiration and passion for the series as well as their search to find a corporate sponsor interested in pairing with them to take the series across  Canada.
Saturday, October 16th – 24th, 2010
Ucluelet Community Center, Ucluelet, BC

Joan Larson’s RCMP Musical Ride and Ken Kirkby’s Isumataq were shown during an exhibition of fine art and fundraising with the proceeds to benefit the Ucluelet Aquarium. The Event was a huge success. Details at www.kirkby-larson.com
Tuesday, April 26th, 2010
BC Legislature, Victoria, BC

Joan will be “Painting on Location” at the Town of Qualicum Beach Pavilion. Meet Joan and watch her work on one of the RCMP Musical Ride Series.